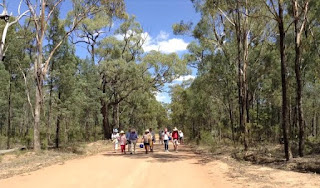 Farmers in northern NSW and Southern Queensland have banded together to fight the combined power of big business and governments in an attempt to have heard their side of the debate about Coal Seam Gas and the future of the Great Artesian Basin.

Narrabri and Chinchilla are almost as remote from Sydney and Brisbane as life on the land is from the world of inner city hipsters and politicians reclining on their padded leather benches.

But it is in these recharge areas of the Great Artesian Basin a relative handful of farmers are fighting for what they say is the future of agriculture in their areas.

They are practical men and women who are not opposed to change and development but their lifestyle and the lives of hundreds of thousands of sheep and cattle are dependent on the continuing flow of water from the Great Artesian Basin -- the million year old aquifer that supplies water to more than 22 per cent of our dry continent.

Without the drinking water produced from bores that tap into the Great Artesian Basin (GAB), it would be impossible to run the current stock numbers, either cattle or sheep, on the sweeping western plains.

The farmers fear that Coal Seam Gas exploration and production that involves drilling thousands of gas wells into and through the GAB could destroy the aquifer and force them to walk off and abandon their farms.

Already many bores near Chinchilla have stopped producing clean water, or in some cases, any water at all.

But getting their side of the story over against the powerful public relations machines and cosy political lobbying groups used by the billion dollar mining industry is an uphill fight.

Only when someone such as Wallaby flanker David Pocock chains himself to mining machinery in protest does the farmers’ one-sided fight even impact on the big city media.

So farmers are now asking Australians, particularly those in the cities, to take a long drive into the scrub to see for themselves the truth of the matter.

They have established a website, Gas & GAB Tours www.gasgabtours.com, to allow everyone to take a self guided tour of the areas affected by the on-going gas exploration and extraction.

The site gives detailed information on how to get there, what to see, where to stay or camp and who to talk to for expert information.

It also warns against trespassing on land owned or controlled by the mining giants -- an action which under new regulations recently pushed through by the NSW Government can now result in fines of up to $5,000 and long jail terms.
Posted by Gift of the GAB KM at 9:10 AM No comments:

Defend the right to protest

Defend the right to protest from Baird's anti-activist laws 12 noon Tuesday, 15 March outside the NSW Parliament.


NSW’s new laws and fines for protesting won’t stop me protesting. The reduced fines for mining companies will encourage them to cut corners and therefore pollute more, giving me more reason to protest.

The new laws will give police more power "to deal with people who intend to 'lock-on' to equipment", and the authority to move people on in all protest activities.

Fines for mining or exploring without authority, or failing to provide information and records to an inspector have been reduced from $1.1M to $5000.

Santos CSG activities in the Pilliga and the actions of the Department of Industry will be questioned in the Land and Environment Court starting April 6.
Posted by Gift of the GAB KM at 11:28 AM No comments:

Email ThisBlogThis!Share to TwitterShare to FacebookShare to Pinterest
Labels: CSG, Government, The Pilliga

Please support these farmers from the Pilliga region by protesting against CSG outside Santos offices between 10.30am and 12.30pm at
32 Turbot Street, Brisbane
1 Macquarie Place, Sydney.
All welcome.
Santos have not submitted an Environmental Impact Statement for their water treatment plant in the Pilliga. A legal challenge about the approval process is pending.
Newspaper reports stating that all of the Narrabri community is behind the project are incorrect. They refer to the numbers of arrests of people from outside the area. This is due to the police not arresting local farmers when they lock on.

The NSW government is planning to crack down on CSG mining protesters, giving the police more powers and increasing fines. Some fines for protesters are already higher than those paid by companies for polluting the environment. 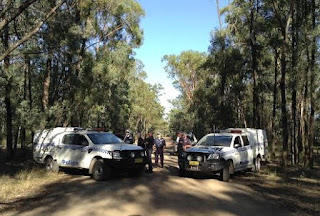 During the night I woke up several times to check that the riot squad vehicles were still in the motel car park. They were still there when we drove out to the protest site in Old Mill Road. We were one of the first vehicles to arrive. Two police cars were parked across the road and we were told the road was blocked for a police operation. We turned around and parked on the side of the road. More and more people arrived and parked their cars. A large oval of people formed on the road for a smoking ceremony. After this a meeting was called and it was decided to walk 20 metres into the forest or along the fence to the gates. We followed a bagpiper along a track near the fence where a very nice policeman held back a bush so we could pass.

Banners covered the gate and fence into Santos’ Leewood site. There were several security from Santos and about six police. They were tolerant, polite and courteous, showing none of the aggression I had heard about at other protests in the area. They knew that the protesters had planned to walk onto the site and they were confident that they had thwarted the plan.
Read more »
Posted by Gift of the GAB KM at 2:00 PM No comments:

When I heard that AGL had pulled out of CSG mining at Gloucester, I was determined to join the protests against Santos’ Narrabri Gas Project, the only CSG project awaiting approval in NSW. Common sense dictates that this project should not go ahead as it is located in one of the few recharge areas of the Great Artesian Basin, a vast water resource underlying four states.

I convinced my sister and two friends to join me at a protest to be held at the gates of Santos’ Leewood site. The day prior to the protest I took them on a quick tour of the area, starting on the western side of the Pilliga Forest to Pilliga, the town. My sister insisted on going into the town to see if anything remained of the drive-in theatre that we remembered from our youth. Nothing remained. However, the Pilliga bore was much improved and appeared to be a popular camping spot even in the heat of February.
Read more »
Posted by Gift of the GAB KM at 1:53 PM No comments:

The Pilliga - 8am Friday 19 February – 5pm Sunday 21 February 2016 – Pilliga Push Converge
The major event is on Sunday 21st February, when hundreds will gather for a peaceful protest in the Pilliga forest. Meet at 9am at Old Mill Road (Dog Fence Road), 22km south of Narrabri, 300m off the highway.  Kids are welcome. Please bring your signs, water, snacks and sun protection. Call 0448 337 072 for further information.

1. The Pilliga State Forest is a critical recharge area of the Great Artesian Basin.

3. CSG may contaminate water in aquifers and the Great Artesian Basin which are both used to water stock and supply town water.

4. The steal and cement which plug the wells will corrode over time causing contamination and the water from the GAB to leak into the coal seam below where the gas and water has been removed.

5. The costs of replugging the wells will have to be paid for by future generations.

6. Santos has applied to have 850 gas wells in the Pilliga Sate Forest. All development approvals should cease until -
a. A pending court case is heard over the lack of a proper environmental assessment for this facility. http://www.edonsw.org.au/defending_the_pilliga_in_court

b. A Bioregional Assessment is completed later this year on the Great Artesian Basin. This is underway in order to better understand the potential impacts of coal seam gas and large coal mining developments on water resources and water-related assets. The Federal Department of the Environment, the Bureau of Meteorology, CSIRO and Geoscience Australia are all involved. http://www.bioregionalassessments.gov.au/products.shtml.

Friday protests Martin Place Sydney 11.00am to 1.00pm
All welcome.